In 1984, after working for several landbased pirates in London, Peter got an audition at BBC Radio One. But despite being shortlisted he was pipped at the post by a Radio Luxembourg DJ who got the job due to his national profile.
Ironically Peter was then signed up by Radio Luxembourg in April 1985, where he happily stayed until November 1991. As Peter recalls "For me getting Radio Luxembourg 208 was fantastic and it was surreal to be suddenly working alongside broadcasters that I had listened to all my life... like Bob Stewart and Stuart Henry. All the jocks that I admired the most came from Luxembourg and before they were at Luxembourg they were at Radio Caroline!"

Relocating to Los Angeles he began writing and DJ'd at Stringfellows Beverley Hills for the next three years. Returning to the UK Peter also worked at WISH FM Wigan and Mercury FM Crawley.

Peter joined Radio Caroline in April 2008. He enthuses "Caroline's music policy is simply how music radio should be! No research needed. No patronising tight rotation of the same old hackneyed hits... just guys running a radio station who know what they are doing, know why they are doing it and know what great music is. You're broadcasting to adults. People who know a lot, and expect a lot... They brought albums not just singles... There has been a lot of music made... and therefore a lot of music needs to be played... It's a duty a music station owes to it's public!" 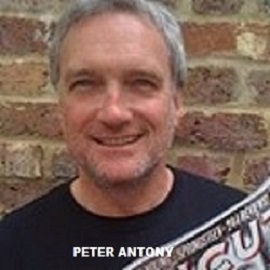